The Catherine Juracich Team, which has brought in $156 million in sales volume year-to-date, will now be affiliated with Corcoran Group’s Chelsea office.

The top-performing Catherine Juracich Team has moved from Douglas Elliman Realty to the Corcoran Group, the firm’s CEO and President Pamela Liebman announced on Friday.

Led by Catherine Juracich, the team has brought in $156 million in sales volume year-to-date, and currently holds over $70 million in open listings. Juracich, along with team members Thomas Ventura and Alexis Godley, will now be affiliated with Corcoran’s Chelsea office under the leadership of the office’s senior managing director Garret Lepaw.

“We are thrilled to welcome Catherine and her team to Corcoran,” Liebman said in a statement. “Catherine has an incredible track record and is a highly respected real estate expert, always one step ahead of the dynamic New York City and Hamptons markets. With Corcoran’s resources and guidance driving them forward, I’m confident that her team will be unstoppable.”

While at Douglas Elliman, Juracich became a top producing agent at the brokerage and was recognized at Douglas Elliman’s 2022 Ellie Awards with a Pinnacle Award, which celebrates agents who made over $1 million during the previous year. Thanks to her strong presence in the Hamptons, Juracich also was responsible for representing the buyer in one of the market’s top ten deals in 2021 — the $55 million sale of an East Hampton estate.

Prior to starting her real estate career, Juracich worked in a corporate sponsorship role with Major League Baseball, where she became an expert in marketing, sponsorship and sales strategy, skills that have helped her to grow a robust network of clients in real estate. 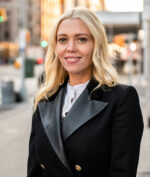 Juracich expressed gratitude for her time at Douglas Elliman, while noting that the move to Corcoran was the right one at this point in her career.

“Bringing my team to Corcoran was an easy decision — they are the top brokerage in Manhattan and are known for incredible agent support,” Juracich said in a statement.

“Continuing to grow my business both in New York City and the Hamptons is a big priority for me, and I’m confident that they’re exactly what we need to elevate our business even further. I remain thankful for my time at Douglas Elliman as they were a major driver in my success, but I am excited to see how far our team can go with the Corcoran brand behind us.”

Outside of real estate, Juracich has shown her dedication to the community through her involvement in the Hudson River Park Playground Committee, which was was a founding member of and the committee’s first president. She resides in Chelsea and Amagansett with her husband and children.

Why aren't you rich yet?

The Richest People in the World in 2022